5 Thoughts After 1 Month of Changing My Diet Completely 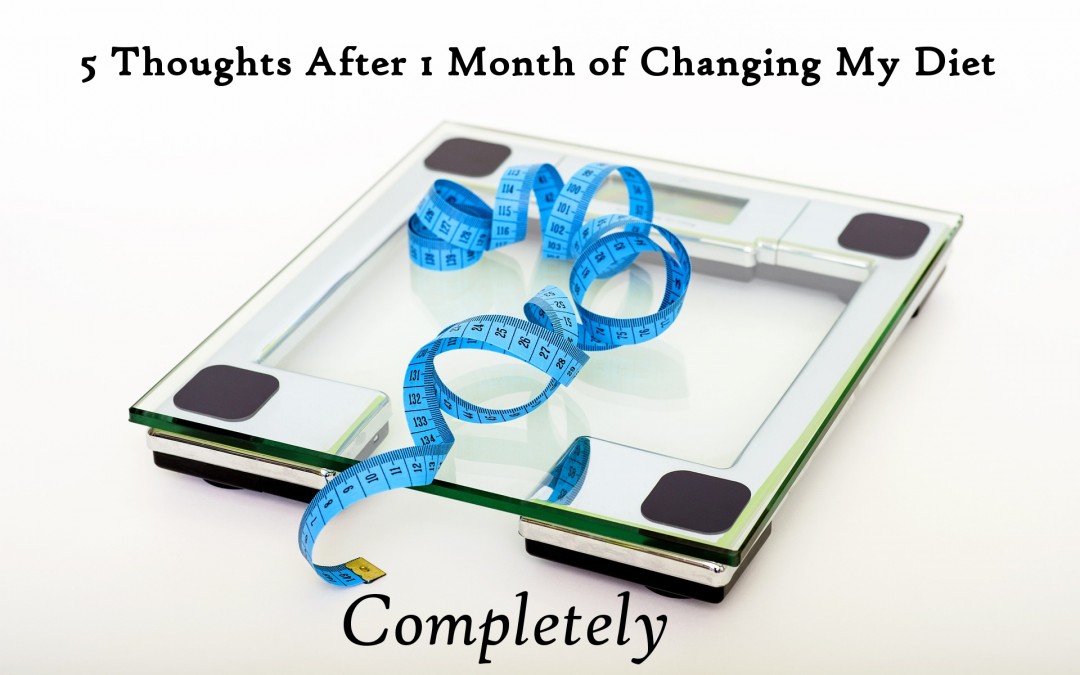 This, 5 Thoughts After 1 Month of Changing My Diet Completely, article concludes my experiences of a new lifestyle beginning. The 30 days period have been filled with moments of both joys and frustrations. The feelings of pleasure come from the positive aspect of the diet. Moreover, I noticed some negative aspect as well which I try to share with you as openly as possible.

Changing the diet completely means that, word by word. I began the month with 5 days of fasting in order to get rid of the toxic of my old habits. After the fasting period was over, I tried to eat as suitable food as possible from the perspective of my digestion. I can give you a tiny peek of my recent diet:

So without further talks, let’s get into the 5 Thoughts After 1 Month of Changing My Diet Completely. First of all, the feeling of being healthy again came into the picture step by step. Sure, the beginning of the diet transformation is a pretty rough path for any person. Fasting isn’t that easily done when you have to work at the same time.

Lucky me, since being a location independent entrepreneur, I can decide myself how and when to work. Click To Tweet

As the month went by, the healthy feelings began to rise and play the major part of the thoughts.

Secondly, I became even more productive during the month. When your body doesn’t need so much effort for your digestion system, you’ll be able to put more focus towards other important things.

Especially when you’re writing blog posts and doing other internet marketing related stuff, being productive help you very much. It doesn’t hurt to be fecund in other parts of your life either, does it?

I touched on this balanced stomach matter quickly on the last section when discussing the digestive system. I’m sure you can agree with me when stating that the life becomes so much better in many ways when stomach works properly.

It took some time after the 5 days fasting period to get belly working. Still, it was definitely worth it to get the stomach to rest a bit. That would be a wise choice for you to do once in awhile.

4. Less energized as day go by

Furthermore, there were some negative sides as well during these 5 Thoughts After 1 Month of Changing My Diet Completely. Since the diet is almost entirely carbohydrate free, you become less energized during the day. Particularly when you’re working at the same time.

After 30 days it’s fairly easy to say that this point needs some extra emphasis as soon as possible. Finally, people are saying my look changes quite a much after one month. It can be either good or bad thing depending on the person I came across. The wife obviously got scared since I wasn’t as soft she had used to feel me.

I must admit though that I lost around 8 kg during the month and it wasn’t just fat. Even though I didn’t have that huge muscles before dieting, I lost the remaining ones, too. The next step is to begin to get some figures back, for sure.

So what’s my next step (after trying to get those muscles back…)?

I’m planning to continue keeping my diet in order. For sure, I will bring some of the old foods back a bit by bit. But the wheat and dairy products will get left behind permanently. Those foods just don’t get along with my digestive system at all.

Finally, I’d recommend to anyone considering of changing diet for a healthier direction just to take the step. Even though it’s indeed difficult to leave some of the delicacies out of the diet now, it will pay back many times over in long run.

Sure, it’s possible to return to the old diet, too, if you don’t see any improvements. But I myself certainly wouldn’t do that – at least when you begin to see how good it’s possible to feel – naturally!