Border Crossing from Udon Thani to Vientiane via Nong Khai

Our border crossing weekend from Udon Thani to Vientiane, in other words from Thailand to Laos, began with sightseeing in Udon Thani area. After working a full day on Friday, we rented a motorbike on the afternoon for 24 hour period. That enabled us to see more of Udon Thani surrounding areas.

We paid a quick visit to Nong Prajak Public Park – the #1 tourist spot in Udon Thani according to TripAdvisor. About an hour later, the sky suddenly ripped off and a lightning storm started. Luckily, we managed to find a cozy restaurant almost instantly and didn’t get wet that badly.

Having said that, the storm poured water heavily down almost two hours so we were stuck in the restaurant. Finally, it got lighter enough letting us drive back to the guesthouse. Unfortunately, our 24 hours of motorbiking didn’t start well from the weather’s point of view.

Giving another shot for sightseeings

We gave another shot to sightseeing on Saturday. We woke up early in order to check the weather both outside and the forecast. Since it didn’t predict any rain before afternoon, we quickly began our road trip with a 40-kilometer drive from Udon Thani to Red Lotus Lake. Locals call it Nong Han Kumphawapi or Talay Bua Daeng.

We’re sure that Red Lotus Lake have had better moments

We had mixed feeling about going to this lake full of red lotus flowers because the blooming time is from December to February and it was already mid-March now. Still, we wanted to pay a visit there and witness the outcome by ourselves. Unfortunately, the blooming was over and we missed the beauties.

After Red Lotus Lake, we continued the road trip morning by driving approximately 30 kilometers Northeast, to Ban Chiang historical site. The area was found in 1966 and has been in the Unesco Heritage List since 1992. It’s famous for its red color potteries. Because the biggest tourism season was over, there were plenty of renovation and fixing going on. Apart from that, unfortunately, there wasn’t much else to see than the Ban Chiang National Museum.

The sky began to turn dark again and we still had to drive back to Udon Thani around 50 km. Having said that, we decided to skip the museum and began the journey immediately back. We managed to return the motorbike and walk back to Surada Guesthouse just before the rain started again.

Since there are only few train departures apart from the early morning or the late evening, our hands were pretty much tied with the 3rd class 11.33am departure. That was ok for us, though, and it cost only 11 baht ($0.30) per person. There is a bus option from Udon Thani to Vientiane too but the cost can rise too high in our opinion. 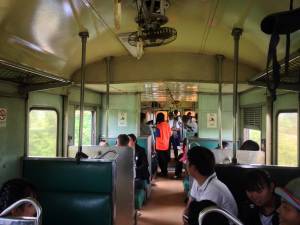 After reaching the border town Nong Khai, we shared a tuk-tuk with few locals from the train station to the boundary point costing us 50 baht ($1.50) for two. You can also walk this one-mile journey from the station to the Nong Khai immigration building. Because we had too much to carry, had some spare baths, and the weather was pretty hot, tuk-tuk was the best option for us.

Border crossing process from Udon Thani to Vientiane itself was very straightforward this time:

(unlike when crossing border from Langkawi, Malaysia to Krabi, Thailand) You have a couple of choices when leaving from the immigration point towards Vientiane:

We aren’t sure about the bus ticket price but since we didn’t have Lao currency, kips, yet, we got into the minivan. It cost 300 baht ($8.60) in order to get taken straight to our accommodation.

It seemed to be a good deal for us to travel the 20 kilometer trip to Vientiane. We would have to take a tuk-tuk from bus station anyway to get our friend’s apartment. It would have cost at least the same amount for two people than we paid now. The driver even borrowed us his cell phone in order to call our friend and let him know we’re coming.

There are ATMs in the Immigration point so you can get kips in order to take the air-con bus/tuk tuk combination if you want to.

If was a very warm reunion with our friend in front of his gorgeous apartment after the journey from Udon Thani to Vientiane. We hadn’t seen him since last summer back in Finland. He told us to stay here as long as we like. At the moment, we don’t have a clear picture yet how our time in Laos goes. But one thing is sure: You will get to read everything about our month in Laos here at FlowingFirm.com!