Since we got back to Finland on mid-May from Southeast Asia, we have had a plan to borrow my dad’s RV. We should have gotten it to our Finnish road trip at the end of May in the first place. Instead, we decided to do the Kuopio trip with my mom’s Daewoo station wagon.

Now, almost three months after our initial plan, the timing was right. We managed to get to use the RV for four days period from Thursday 10th to Sunday 13th of August. It was time for a long waited RV-weekend. There were few variables along the way, though…

There were few variables along the way, though…

Posing at the adventure park

Lakeside view from the castle

The park was open from 11 am to 5 pm. There were seven different adventure tracks within the park. The tracks offered various activities such as ziplining, swings, and wobbly wooden bridges at the altitude of several meters. Even though there were only a couple of employees in the park, it was impossible to get into troubles. Every time you went ahead to accomplish a track, you would attach yourself to the railing via cable. That relaxed the kids as well as us when trying to concentrate staying up on the track instead of afraid the heights.

First three courses were the easiest ones. They were suitable kids all ages. 5-year-old could handle the fourth one as well and 8-year-old the fifth one. I and my wife took the sixth track, too. Unfortunately, we didn’t have enough time for the hardest course, 7th, this time.

Whole six hours adventure park session with only one break

Riding to the park

Landscape along the way

Since the kids were so excited completing the courses, we only kept one lunch break during the six-hour-period. After leaving the park, we ate a quick dinner in the RV before dropping the children back to home. We had planned to continue driving south after the park but were too exhausted. Moreover, we promised to be babysitters on Friday for the kids so we couldn’t drive further anyway.

The second RV Day on Friday became different than we first anticipated. We had planned to drive to the Southern Coast of Finland and see beautiful summer town, Hanko. But since there was an acute need for a babysitter, we left our hedonistic needs behind for a moment and helped the relatives out.

We were watching three kids together with the wife from 7 am to 4 pm. That was a wonderful learning experience for us. Everything went great, though. After the babysitting gig, we went for an evening swim with the whole family since the weather was just great. At the same time, we decided to finally begin driving farther straight at the dawn of Saturday morning.

This day should have been the day we started the engine of our borrowed RV and began the long waited RV-weekend around Southern Finland. But there was a tropical storm quickly closing southern parts of the country. Sure, it wouldn’t have mattered too much since we would have been inside a big, cozy RV.

Nevertheless, we decided to postpone the beginning of driving with a couple of hours.

Since the weather didn’t appear to get any worse, we began our journey towards Southern archipelago of Finland. We chose two different locations, Taalintehdas and Kasnäs for our destination. The kids wanted to join us third day in a row so we picked them up on the afternoon.

The bridge of Strömma Canal in full height

Having crazy time at the playing museum

During the day we saw an astonishing bridge lifting at Strömma canal. Furthermore, we visited in children playing museum in Taalintehdas. Finally, before heading back to home, we had a tasty stand-up meal dinner in a cozy sea view restaurant in Kasnäs.

Bee art along the way 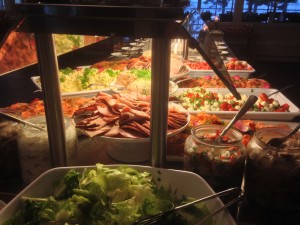 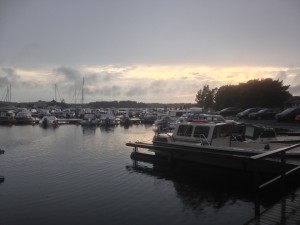 Weather getting better during the evening

The last day of having the RV, Sunday was solely dedicated to the cleaning. Even though the driving a big vehicle is great fun, the cleaning part isn’t that exciting. There is sand everywhere inside the RV – especially after our swimming trip on Friday.

Still, it’s was definitely worth to do three-day trips with children. Their excitement was almost as large than ours – mine and wife 🙂

Let’s hope the cleaning process of ours gives another chance to borrow the magnificent vehicle in the future!

This website uses cookies to improve your experience while you navigate through the website. Out of these, the cookies that are categorized as necessary are stored on your browser as they are essential for the working of basic functionalities of the website. We also use third-party cookies that help us analyze and understand how you use this website. These cookies will be stored in your browser only with your consent. You also have the option to opt-out of these cookies. But opting out of some of these cookies may affect your browsing experience.
Necessary Always Enabled
Necessary cookies are absolutely essential for the website to function properly. This category only includes cookies that ensures basic functionalities and security features of the website. These cookies do not store any personal information.
Non-necessary
Any cookies that may not be particularly necessary for the website to function and is used specifically to collect user personal data via analytics, ads, other embedded contents are termed as non-necessary cookies. It is mandatory to procure user consent prior to running these cookies on your website.
SAVE & ACCEPT